I realized as I sat down to write that since I am in my “off season”, I don’t have a lot of content as a “type 2 triathlete”. I’m still training but the sessions are relatively short and easy so fueling is a non-issue at this point. Also, my TrainingPeaks compliance last week was about 50% so fueling REALLY was not an issue. 😛 . I slept in. A lot.

I am “self-coached”. And I use that phrase loosely. Part of me would LOVE to have someone setting my workouts and checking in. But I am a middle of the pack age grouper with goals to “complete not compete”. Would I benefit from a coach? Absolutely! Is it high enough priority to impact my family’s finances? No. There are a couple of more experienced triathletes in my life who answer questions and help with training simply because they love the sport. I do not pay them and they prefer that they not be called “coaches”. They don’t write most of my workouts or my training plans. They don’t check my TrainingPeaks. But they are a fantastic resource.If you are in the Boise, ID area and are looking for a small group to train with, let me know.

I’m not even going to speak on my nutrition last week. My app that I use to track carbs and blood sugar readings sends me a weekly comparison report. It says my Blood Glucose trend was up 10 points, I have 2 more hyper readings and my carbs/day were up 19 grams. However. I also started testing 3-4 times a day instead of 1-2 and actually logging (almost) every bite. So without comparable data sets, I don’t know how accurate that is. Next week will give me a better idea of how I’m doing.

Back around the New Year I met my friend, Theresa, through a mutual friend. I knew of Teresa, knew who she was from around church, but had never spoken to her. Teresa had set a goal to hike a local landmark, Tablerock, one hundred times this year. I had never been up there but it was on my “things to do” list so I offered to join her a few time although I did not have any kind of similar goal. We met up for the first time on January 7th. This last Saturday marked my twelfth trip.

Trailhead at sunrise – cross is the top

Out of those dozen, some have been more challenging than others, there have been different intentions and goals…but none have been boring.

There was a pre-dawn hike at the end of February when Teresa and I navigated the trail by the light of the full moon. It was amazing to hear the night animals and witness the two large herds of deer moving as sunrise approached. It was brutally early and difficult…we were convinced someone had moved our primary landmark. And it was cold. The water in my bottle froze. While I was carrying it. But it was also breath taking. 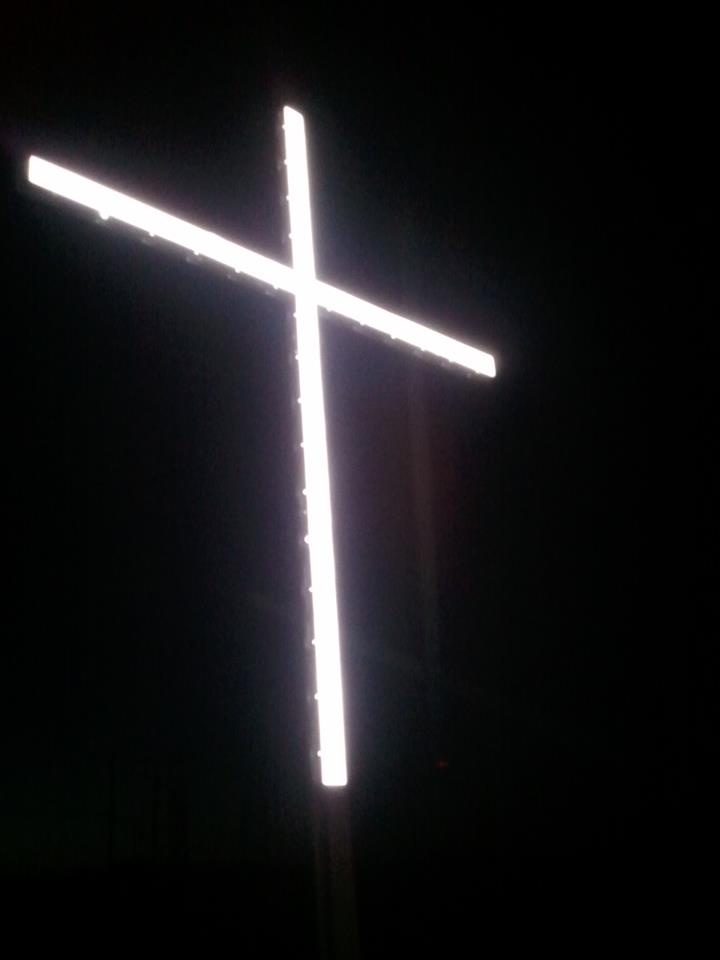 Base of the cross – pre dawn

I actually didn’t go back for almost exactly two months and not because that particular trip traumatized me. It just didn’t seem to fit in the schedule. But my next time up was the first time with my two oldest boys…note worthy in itself. Another six weeks passed of poor weather and the lure of my pillow before I made my next attempt. My husband went that time and brought the dog. She laid down in the middle of the trail about 2/3 of the way up and refused to move. I wish I had the presence of mind to get a picture but I was suffering big time. Jon took the dog back down (she was happy to move THAT way) and Teresa and I pressed on. Just before the last section (and I mean the VERY LAST BIT), I looked at her and said “I’ve gotta stop. I’m either going to pass out or throw up.” I didn’t, we finished and I was fine. I dubbed that one my most triumphant hike yet. I’ve had faster but mentally that was a huge hurdle.

Since then I’ve been pretty much every chance possible. Jon usually joins me. I went with a friend once to prepare her for a group hike she was doing the next week. TheKid and I went one afternoon that I was off. He ended up rescuing someone’s dog and carrying it back to the parking lot…which resulted in us hiking a couple of steep hills TWICE. And maybe a few tears. And unladylike utterances.

All three boys went with us on the 4th along with some of our friends for a prayer hike. For LilBit, who generally melts down at the mere hint of discomfort, this was a  major accomplishment. 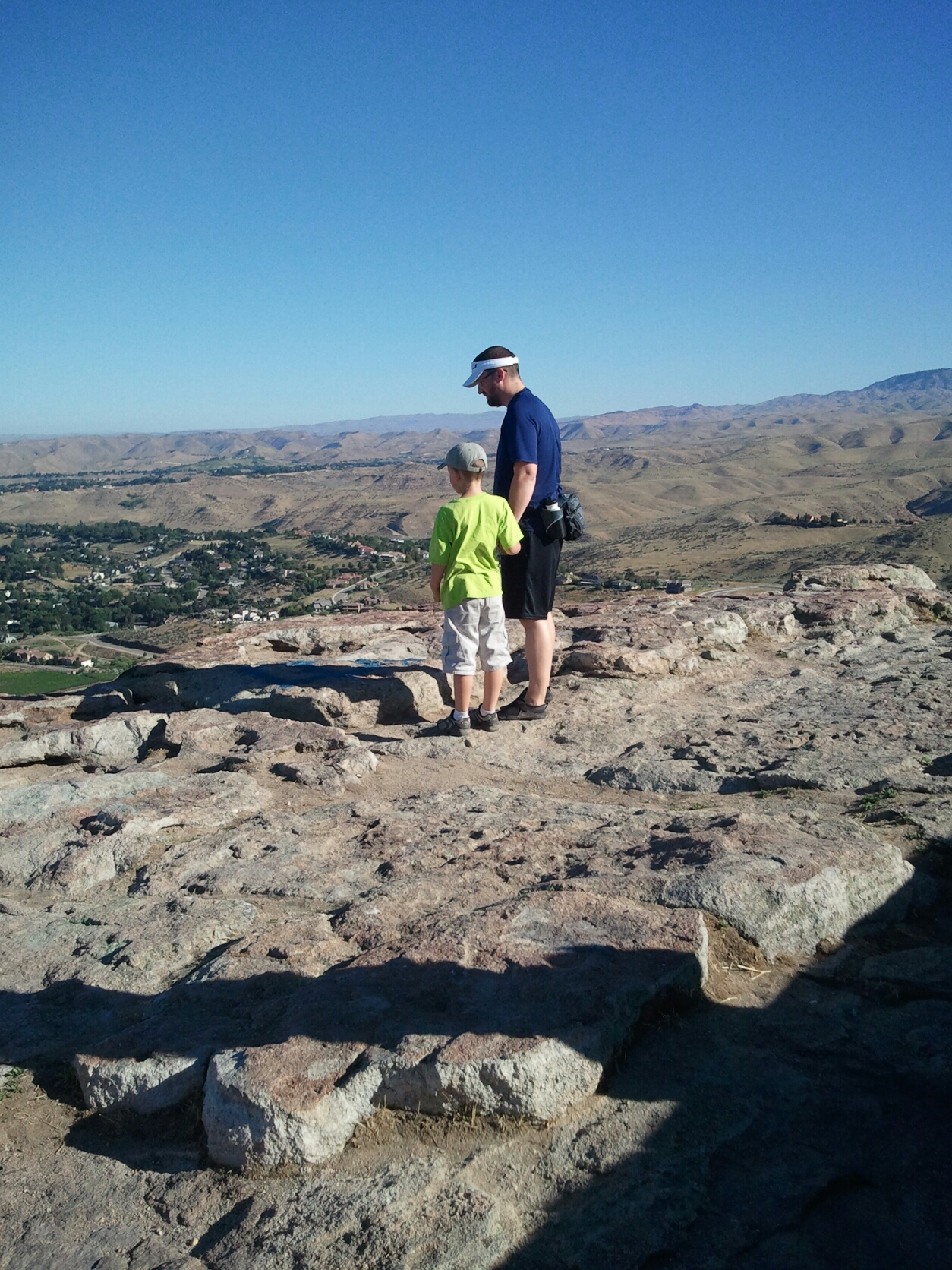 “It’s like beating a video game, only in real life with my body!”

He has expressed his total lack of desire to ever do it again. Exact reason “I didn’t really like going up. Or down.” Okay then.

This last Saturday marked my fastest time to the top – 38 minutes. The goal is to eventually break 30 minutes….without kicking my husband’s teeth in when he attempts to encourage me. He does tend to stay behind me and just out of reach…

I still don’t have a goal comparable to Teresa’s but it will be interesting to see what the count is at the end of the year. It never gets old. There’s something unique each hike. The trail always looks different and the experience never duplicates. And the view? Is gorgeous.

Well. It’s officially summer. We’re moved, we spent a week visiting with family and I finally feel like I can start getting into a routine again. One huge issue is that in all the chaos and busy-ness, I let myself slip — actually I happily dove headfirst — back into the Dr. Pepper habit. And what’s worse, I pulled my poor husband down with me. He’s been drinking Pepsi again so I feel double bad. I’m ready to start weaning myself off of it though. I went all day without one…not without caffeine (or even sugar)…but without a Dr. Pepper. And not surprisingly I feel SO good.  In a day or so my eyes might start glowing red and my head spinning around and I’ll get a SMALL one. But I’m going to try to reduce the symptoms with green tea.

Of course it also helps that I also worked out for the first time in a month. Twice. And “real” workouts too, not the excuse of lifting boxes. This morning I got on the treadmill for 20 minutes for some mid-intensity intervals. TheKid and I played tennis for about half an hour this afternoon but I don’t count that in my workouts. It was fun though. And since neither of us have ANY control, we spend most of our time chasing balls. But. The real accomplishment today – I went to, and survived, a (hr long) spin class for the first time in about 2.5 years. I pulled out my “diaper shorts”, grabbed a towel & water bottle and decided to see how much I could do. The odd thing is it actually seemed EASIER than I remember. Maybe because classes at this gym are alot less intimidating? But I could actually STAND and do jumps. I couldn’t do that at *all* before. Now I didn’t do all of the higher intensity stuff. In fact I did less than half. A few times I started seeing bright flashes of light in my peripheral vision and decided that’s probably a pretty good sign to sit my soon-to-be sore bottom back down. But I was happy with what I did and am looking forward to next week.

Wait? Did I really just say that?